About six weeks ago, I posted a graphic that showcased the "OneUI" look of the Notes 8.5.4 Social Edition client as a teaser of the work going on towards this year's new Lotus Notes/Domino release. The feedback was a little surprising, though consistent with a thought I had started to hear on the road.

Put simply, the strategy of releasing both a Notes/Domino 8.5.4 "maintenance release" and a Notes Social Edition "feature release" simultaneously was confusing. Questions abounded as to the difference between the two, how many times you would have to touch the desktop, why separate them at all?

Our logic at the time was, the 8.5.4 maintenance release would be the most stable Notes/Domino 8.5.x release for those who just wanted a quality version update. Notes/Domino Social Edition would deliver the "Project Vulcan" vision, including the updated UI, embedded application experiences, a great update to iNotes, an incremental Notes set of features, and the Notes browser plug-in.

About the same time, internally we were facing a few decisions about the new release. A new introductory experience, called the "discovery" page, looks awesome but we were struggling with how to set it up for 8.5.4 users versus Social Edition users. Other new features were taking extra effort to keep firewalled between the MR and the feature release, vs. the general attitude we have had since Notes/Domino 8 of shipping the new features without requiring them to be enabled. Everyone kept calling the thing "8.5.4", though my team had worked hard to establish Notes Social Edition as a stand-alone name for the new release.

In short, I called time out. Based on your feedback here, similar comments in Design Partner reviews, and some challenges we were having with explaining the whole thing to our extended IBM team, I revised our release strategy.

The new version of Notes/Domino shipping later this year will now be a single Lotus Notes/Domino Social Edition 8.5.4 release. As an administrator, you will be able to configure the code to deploy in the manner in which you intend. If you want it to just be a maintenance release, you won't have to enable the new features. If you want the new stuff including embedded experiences, you'll be able to deploy all of those components. If you want something in-between, that will be an option.

The code drop 4 beta that we just delivered to design partners and beta customers still maintains the separation between the MR and feature release concept. Going forward we'll still likely have a separate download for embedded experiences code; that will allow us to iterate on that quickly as a single component rather than having to update the entire Notes/Domino release to provide new embedded experiences features. Otherwise, though, you'll see one name marketed and one name displayed in splash screens and the like within the product.

Beyond this release, it will be time to end the confusion. Our next feature release, planned for another 18 months or so past Notes/Domino Social Edition 8.5.4, will definitely increment the first digit. Whether that is a 9 or something funkier, we'll just have to see :-) 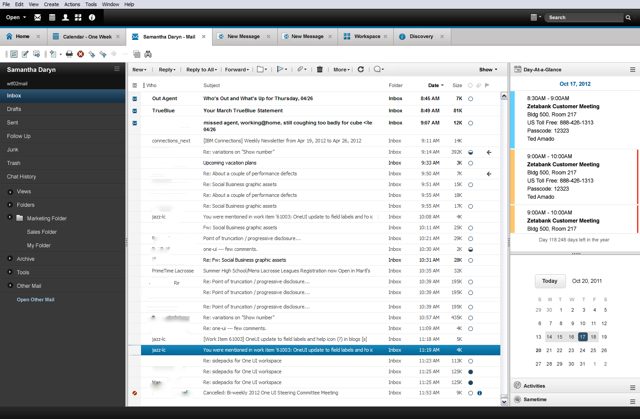